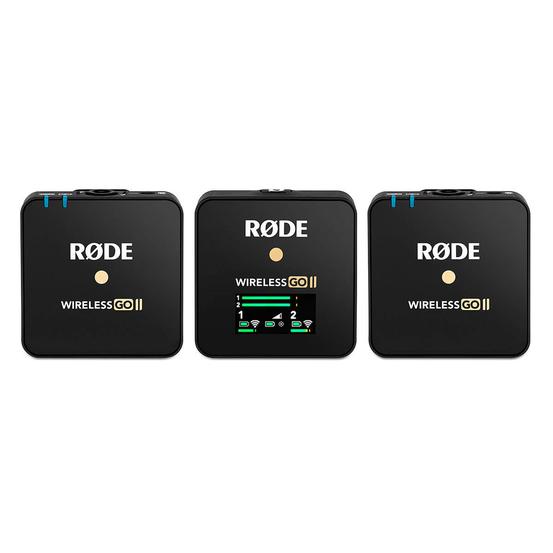 Rode's new version of their popular compact Rode Wireless GO Microphone System steps it up to eleven with brand new on-board recording capability and up to 200m line-of-sight transmission range.

The Rode Wireless Go II transmitters each act as clip-on microphones, featuring a high-quality in-built microphone for completely wireless operation, or they can be used as a belt pack with an external lavalier. Thanks to series IV 2.4GHz digital transmission with 128-bit encryption they deliver crystal-clear audio for any content creation application with an extended range up to 200m line of sight and also improved transmission stability in dense RF environments.

Measuring in at an ultra-compact 44mm x 45.3mm x 18.5mm at a mere 30g for the Wireless GO II transmitter (TX) and with the Wireless GO II Dual-Channel receiver (RX) only two grams heavier, this unmatched wireless mic solution is the perfect set up for content creators, interviews, filmmakers, on-camera presenters, news gatherers and vloggers. With no menus and no finicky dials, just simple power-on-and-go functionality and a bright LCD screen showing you what you need to see the Rode Wireless Go II Dual-Channel Wireless Microphone System is incredibly easy to use. While Rode's companion app Rode Central allows you to access other powerful features and extended customization.

The Wireless GO II takes wireless versatility to new heights. Featuring a 3.5mm TRS analog output for plugging into cameras, plus a digital audio output via USB-C for plugging into smartphones, tablets and computers, it is perfect for content creation, filmmaking, on-camera or on-stage presentations, vlogging, YouTubing, live streaming and more.

Up to 24hrs of On-Board Recording

On-board recording means you never have to worry about dropouts or audio issues again, while the flexible gain control lets you precisely tailor the output to your device. The Wireless GO II also offers the option to record each channel separately or combine the two, ensuring ultimate flexibility in post-production. Each Wireless GO II transmitter has enough internal memory to store over 24 hours of compressed audio and seven hours of uncompressed audio. When active, the recording will begin as soon as the transmitters are connected to the receiver, so you will always have a backup of your recording in case you experience dropouts or other audio issues.

When you load your files in the RØDE Central companion app, you’ll even be able to see exactly where any dropouts occurred, so you can pinpoint exactly what audio you need. Welcome to worry-free recording.

The Wireless GO II offers the same pocket-sized form factor as the original Wireless GO. The transmitters and receiver weigh less than 32g, taking up virtually no space in a camera kit bag, backpack, handbag or briefcase. It also comes supplied with a handy carry pouch to keep everything tidy and secure. The Wireless GO II's unique clip design makes it quick and easy to mount onto clothing or a camera cold shoe, mobile camera rig, boom pole, or any cold shoe accessory – ultra-compact wireless audio for any recording situation.

Unlock advanced features for the Wireless GO II with RØDE Central! This easy-to-use companion app lets you set up your device preferences, access, optimise and export recordings, activate and deactivate functions, and update your firmware. It’s free to download for Mac and Windows.

Connecting your Wireless GO II to RØDE Central allows you to access a host of handy features, including a safety channel, which records a second track at -20dB in case your main audio clips, a mute lock so you never accidentally mute your transmitters and a fine gain control which expands the three-stage pad to a 10-stage pad.