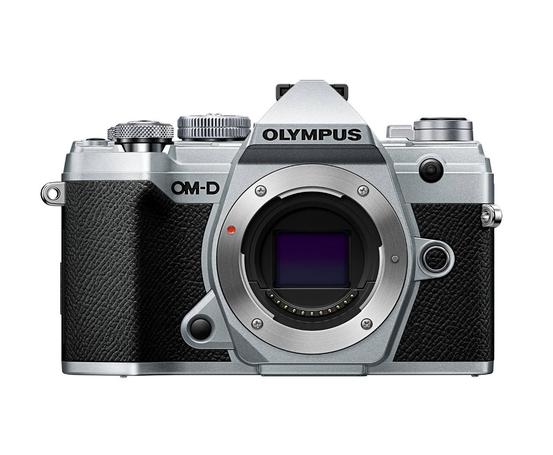 The Olympus E-M5 Mark III Body - Silver features dustproof and splashproof abilities in a compact and lightweight body and is equipped with the same 121-point all cross-type On-chip Phase Detection AF as the OM-D E-M1 Mark II, offering high-speed, high-precision autofocus capabilities in a compact, lightweight body. It also features a powerful image stabilisation along with versatile shooting features such as Live Composite and Live Bulb. Even when paired with the M.Zuiko Digital ED 12-40mm F2.8 PRO lens, it remains a compact, lightweight camera system that can fit in a small bag to take anywhere. The 121-point all cross-type On-chip Phase Detection AF delivers high-speed precision focusing, even for fast-moving subjects where focus is difficult, so users never miss a photo opportunity.

All parts of the E-M5 Mark III has been miniaturized to provide a body as small as possible. Dramatic improvements in power-saving performance enables the use of the more compact BLS-50 battery for an even more lightweight and compact form overall. The compact system size means that you can shoot for long periods of time in locations where tripods cannot be used and easily carry a large zoom combo on trips so photo opportunities are not missed.

The E-M5 Mark III is equipped with 121-point all cross-type On-chip Phase Detection AF for focusing across a wide range of the screen, a staple feature in the E-M1 Mark II. Unlike DSLR cameras, there is no degradation in AF precision when using a fast lens.

The E-M5 Mark III offers high-precision, high-speed focusing from the maximum aperture setting of all M.Zuiko Digital lenses regardless of subject patterns. The algorithm has also been improved over previous models, preventing the focus from unexpected jumping to the background even in mixed perspective scenes with near and far subjects.

Up to 10 fps high-speed sequential shooting in AF/AE tracking is possible on the E-M5 III for capturing subjects with intense movements, such as sports photography. The moving subject tracking algorithm utilizes AF information from both Live View images and recorded images to enable quick tracking of unpredictable subject movement and changes in subject speed.

Pro Capture mode makes it possible to record scenes that are difficult to time, such as a bird taking flight. From the moment the shutter button is pressed fully, 14 frames are retroactively recorded at a full pixel count of 20MP, and up to 30 fps high-speed shooting is available in Pro Capture H. RAW recording is also supported.

The E-M5 III features a high-speed mechanical shutter that operates up to 1/8000 second, making it possible to shoot at a wide aperture setting for defocusing effects even when using a fast aperture lens in bright outdoor conditions.

Just as on the E-M1 Mark II, this model boasts a combination of the approximate 20.4 Megapixel Live MOS sensor, the latest high-speed TruePic VIII image processor, and powerful image stabilisation. When paired with high-resolution M.Zuiko Digital lenses, it is capable of capturing images with minimal noise even at high-sensitivity settings and delivers high image quality with minimal distortion up to the edges of the shot.

Olympus developed a new 5-axis IS unit to deliver high level of image stabilisation in a compact, lightweight body. Based on camera shake information obtained from the high-sensitivity gyro sensor and image analysis, the TruePic VIII image processor precisely controls the IS unit to enable up to 5.5 shutter speed steps of compensation performance.

The in-body 5-axis IS ensures image stabilisation with all M.Zuiko Digital lenses used with the E-M5 Mark III. In addition to angular and shift blur, roll blur, which cannot be compensated for by in-lens image stabilisation only, is corrected for powerful handheld shooting support.

By synchronizing the in-lens IS of supported lenses with in-body 5-axis IS, the E-M5 Mark III delivers higher image stabilisation for up to approximately 6.5 shutter speed steps of compensation performance, making it perfect for low-light situations and telephoto shooting.

Information from the On-chip Phase Detection AF sensor is used for optimal focusing when recording video. With this, you can record 4K 30P high-definition video. Combining 5-axis IS with electronic stabilisation makes it possible to record stable video with minimal camera shake. No special stabilisation equipment is required, even when moving around actively.

Easy to use smart features

Focus Bracketing can capture up to 999 shots with a single shutter activation while shifting the focal position slightly between each shot. The amount of focal shift can be selected from 10 levels, and recorded images can be combined into a single image using Olympus Workspace V1.1 image editing software.

It is possible to create a single image with a depth of field that cannot be obtained simply by stopping down the aperture. Because the aperture is not stopped down too far during shooting, this feature also enables high image quality.

The camera is also equipped with Focus Stacking, which automatically composites images on the camera. Eight photos with different focal positions are composited on the camera for a photo with a greater depth of field that is in focus from the foreground to the background.

With anti-flicker shooting, the camera detects the flicker frequency of light sources and controls the shutter timing at peak brightness to suppress exposure and colour variations between frames. Flicker scan makes it possible to select an appropriate shutter speed to reduce flicker effects.

The entire camera body is sealed for high-performance dustproof, splashproof, and freezeproof capabilities so users can focus on shooting with the E-M5 Mark III without worrying about the environment. This model is also equipped with SSWF (Super Sonic Wave Filter) that vibrates the image sensor filter 30,000 times per second to drastically reduce the amount of dust and dirt that ends up in photos.

The Olympus OM-1 was highly regarded across the globe, as a compact, high-performance system SLR back in the hey-days of 35mm film. One of its iconic features was its delta shape of the viewfinder, resulting in a classy form that made it a pleasure to own. The Olympus E-M5 III inherits the classic delta shape and a thumb rests on the back offers an enlarged grip for a solid hold on the camera.

This model features an approximate 2.36 million-dot, high-contrast OLED panel for vivid colours and an EVF (electronic viewfinder) optical system for minimal distortion to the edges of the screen.

Such a design makes framing more accurate so you can concentrate on shooting. The long eyepoint makes it easy to check overall framing even when wearing glasses.

Charge the battery in the camera via USB