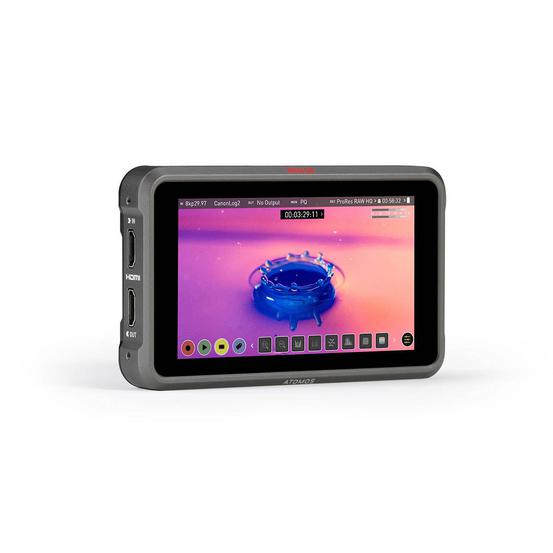 The Atomos Ninja V+ Pro Kit updates the true-and-tested 5" on-camera monitor/recorder predecessor the Ninja V, amd now records and plays back up to 8K raw video to and from purpose-built mini-SSDs.

Designed to bridge the gap between mirrorless and cine-style cameras, this kit pairs the latest 5" Ninja V+ 8K HDMI recording monitor with an AtomX SDI module, a pre-activated H.265 codec, and a pre-activated SDI raw key.

This kit's AtomX SDI module adds two 12-SDI ports to the Ninja V monitor's HDMI output, offering the flexibility of up to three simultaneous video outputs. The SDI raw license enables support of up to 8K ProRes raw video via both the HDMI and SDI outputs, as well as up to DCI 4K120 ProRes. Cross conversion options include HDMI raw to SDI output and the ability to crop and down-convert DCI and UHD 4K for compatibility with EVFs and wireless video transmitters/receivers without adding other converters. A sun hood, battery eliminator, a power adapter, a locking D-Tap power cable, and a hard case round out this handy kit.

The Ninja V+ can record Apple ProRes raw up to 8K30 or DCI 4K120 directly from the sensor, and it is compatible with select cameras such as the Canon R5. It also includes H.265 pre-activated to record with the high-quality, low-bandwidth codec for up to 10-bit recording in ProRes 4:2:2. Display features include a 10-bit screen with a brightness of 1000 cd/m² AtomHDR technology for accurate monitoring of your log gamma footage, and support for popular log formats from Sony, ARRI, Canon, JVC, Panasonic, Nikon, RED, Sony, and Z CAM cameras.

Note: Product is shown in use for illustration only, additional equipment (SDI cables, camera/tripod) is not included.

The Ninja V+ is the next stage in the evolution of the multi-award winning Atomos Ninja, delivering up to 8Kp30 and 4Kp120 continuous recording in Apple ProRes RAW while inheriting HDR, 4Kp60 RAW and video as well as HDp120 slow motion from it’s little brother, Ninja V.

With the ability to capture in 8Kp30 and 4Kp120, the Ninja V+ allows you to stay ahead of the game and ensure that you have the flexibility to grow your system as projects demand. Future proofed quality and formats allow you to stay compatible with newly released and existing cameras, in a world where new cameras are released frequently and technology is advancing at an incredible pace.

The Ninja V+ takes advantage of the new Atomos Silicon chip, the AtomIC3, AtomOS 10 and the incredible efficiency of ProRes RAW to deliver these increased resolutions and frame rates. The new formats also integrate seamlessly into the timeline of your existing ProRes RAW or ProRes projects, without huge storage or processing overheads.

An 8K Revolution Starting with the Canon R5

The Ninja V+ will record 8Kp30 ProRes RAW from the Canon EOS R5 mirrorless camera via a standard HDMI 2.0 connection. Atomos and Canon have worked together for the past 2 years to bring customers a world first for capturing stunning 8K RAW and HDR images with incredible clarity and detail in a compact and configurable system that is very affordable when compared with other 8K setups. The possibilities you have when shooting in 8K are a true game changer. Canon and Atomos have democratized 8K for the masses with no compromise in quality. Coming later in 2021 with an update from Canon.

Stabilise without compromise
The incredible resolution of 8K video means that even after cropping into the image as part of the stabilization process, the final shot will likely still have a resolution of 4K or even 6K. This means that it can integrate with your other 8K footage on the timeline, and still look great.

The Ninja V+ allows you to capture content at up to 4Kp120 in pristine ProRes RAW for high frame rate video that has exceptional image quality. This is a great alternative to using the internal compressed codecs on your camera for high frame rate recording, as they can apply higher levels of colour compression and subsampling, leading to potential artifacts or limitation in the edit/grade.

With the flexibility of providing options for RAW, visually lossless edit ready files, and proxy/sharable files, you have the ability to scale your needs for quality and file size.

AtomX Expansion modules attach to the Expansion Slot on your Ninja V+ and provide additional connections and functionality. The extra horsepower from the Atomos Silicon AtomIC3 chip also allows you to add other ‘plus’ features when combined with upcoming AtomX modules and future Atomos products.

Affordability, accessibility and choice allows users to select recording media to meet their needs. High resolution and high frame rates require sustained media performance, which we have achieved through our ongoing developments with both codecs and data handling. The AtomX SSDmini offers a native fit and will support up to 8K30p and 4K120p.

The Ninja V+ features a 5" IPS LCD screen that is illuminated by a bright 1000 cd/m² LED backlight, making it possible to view in daylight without requiring a hood. Plus, the screen is also colour-calibrated from the factory to ensure accurate image representation.