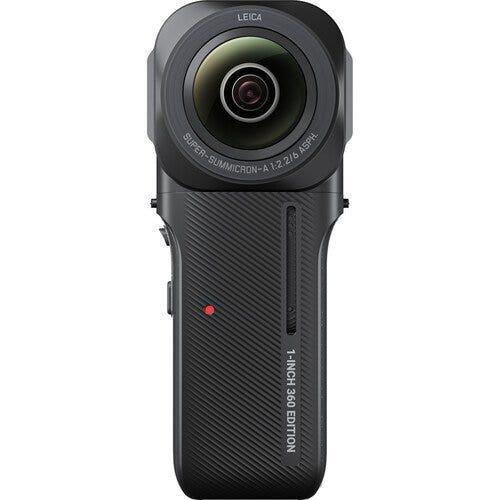 Both 360 enthusiasts and action videographers will be pleased with this long-awaited update to the ONE RS 1-Inch camera in the form of the Insta360 One RS 1-Inch 360 Edition Camera.  a modular 360 update to the popular ONE RS action camera system with interchangeable lenses. This redesigned model features a vertical form factor and a dual-sensor 1-inch 360 mod with lenses on both sides for capturing up to 6K30 video and 21MP HDR photos. And the great thing about the 1-inch 360 mod is that it is interchangeable with your original ONE R or RS base using an optional upgrade kit.

The camera includes the Core RS mod (same as the original 4K Boost Core mod), a dual 1-inch 360 lens mod co-engineered with Leica, a vertical battery base, and a mounting bracket. The 4K Boost Lens is also available separately and can be swapped in for added versatility. The ONE RS 1-Inch 360 builds on the previous models by offering updated built-in FlowState stabilization, a water-resistant housing, 360 horizon lock, a powerful integrated 1350mAh battery, an easy-to-mount bracket, and an invisible selfie stick for seamless POV shots.

The Core module functions as the brain, and its LCD colour touchscreen features a live-view display with controls. A smartphone app is also available to capture, save, and edit your videos using Snap Wizard, and Shot Lab provides effects such as star lapse, time-lapse, sky swap, shadow cline, and ghost town.

Unbeatable 360-degree image quality in a compact device that's ready to go anywhere. With an interchangeable lens design, it's ultra-versatile and upgradeable too.

Image quality that blows other compact 360 cameras out of the water. Share in immersive 360 degrees or reframe as a traditional flat video for social media.

Capture the world around you in sharp definition with seamlessly-stitched 21MP, 360 stills.

No gimbal? No problem. No matter what angle your camera's at, the horizon will always be level without any image cropping thanks to 360 Horizon Lock.

Be ready to shoot in an instant with your preferred shooting parameters just a tap away. Change modes on the go to keep up with the action.

No need run for cover at the sight of gathering clouds! The 1-Inch 360 Edition is IPX3 water resistant.

The 1350mAh Vertical Battery Base provides you with the all the power you need for high-level productions.

Broadcast to every corner of the planet in stunning detail. Reframe to control the perspective or immerse your audience in 360 live streaming.

Crisp, clear calls whether you're in the office or at home. Forget about awkward huddles over your computer screen-ONE RS captures everything in 360 split-screen.