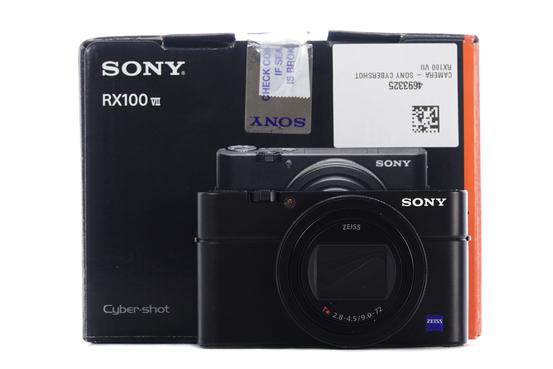 Sony CyberShot RX100 Mark VII / M7, UHD 4K, mic input and performance from the A9 in a compact camera, perfect for social media video and sports

Sony A9 performance in a compact camera body! The Sony CyberShot RX100 Mark VII / M7 improves on the previous Sony RX100 VI / M6 by incorporating the same processor found in the Sony A9 and Sony A7RIII.

The RX100VII is capable of 20 fps continuous shooting and even has a Single Burst mode allowing 7 images to choose from as fast as 90fps. New 357 point hybrid AF system incorporating both phase and contrast-detect autofocusing ensures super fast and accurate focus lock. And Real-Time Eye AF is now available in movie mode.

The newly developed 1" stacked CMOS sensor with DRAM chip in the Sony RX100 VII uses the same high-speed image processing engine BIONZ X found in the Sony A9 and Sony A7RIII the RX100VIII and is capable of 60 times per second continuous AF/AE calculation and 20 frames per second shooting with no blackout in the EVF or LCD monitor thanks to the 60hz refresh rate. The camera also features 90 frames a second Single Burst Shooting (Selectable from 90fps/60fps/30fps)

Thanks to bleeding-edge Sony technology the RX100VII is faster than ever. And coupled with the Anti-distortion electronic shutter you are ready for anything with the RX100VII.

Real-Time Eye AF (Human/Animal) has also been upgraded on the RX100VII.

Additionally Touch Tracking, in both still and movie shooting, allow for touching a subject on the monitor to automatically focus and track it. With Touch Focus you can instantly shift the focus position in the image frame by touching the monitor. The shutter release can also be operated by the Touch Shutter function. Touch Pad allows the user to drag the focus frame to any desired point with a fingertip.

Single Burst Shooting at up to 90 fps!

The new Single Burst Shooting function can take 7 still images (JPEG/RAW) in a row at high speeds up to 90 fps on a single press of the shutter button. This means you can capture 7 super-fast images and select the best shot among those 7.

High-magnification and superb image quality have been condensed into a very compact body. The ZEISS Vario-Sonnar T* 24-200mm lens on the RX100VII effectively packs the two most common pro zoom lens ranges 24-70mm and 70-200mm into one compact lens on a "pocketable" camera!

Record UHD 4K30 video internally to a memory card. Full pixel readout of the sensor and no pixel binning results in about 1.7x the data required for 4K resolution being captured and downsampled to produce higher-quality footage.

The RX100VII is Sony's first camera in the RX series that includes Real-time Eye AF and Real-time Tracking during movie recording using Fast Hybrid AF which utilizes both contrast and phase-detection!

Footage shot on the camera can be edited on a smartphone using the Imaging Edge Mobile application. Gyro data can be imported from the camera and smooth image stabilisation can be applied in the app making it look like the footage was shot using a gimbal.

Thanks to the electronic shutter the RX100VII can take images without producing any shutter sound, this makes it possible to shoot scenes silently without worrying about the shutter sound being heard and interrupting your subject. Silent shooting is also possible in continuous shooting mode.

anti-distortion shutter minimises distortion due to rolling shutter effects when shooting fast-moving subjects. The super-fast readout of data from the image sensor means a major reduction in image distortion of fast-moving action like baseball swings, golf and racing.