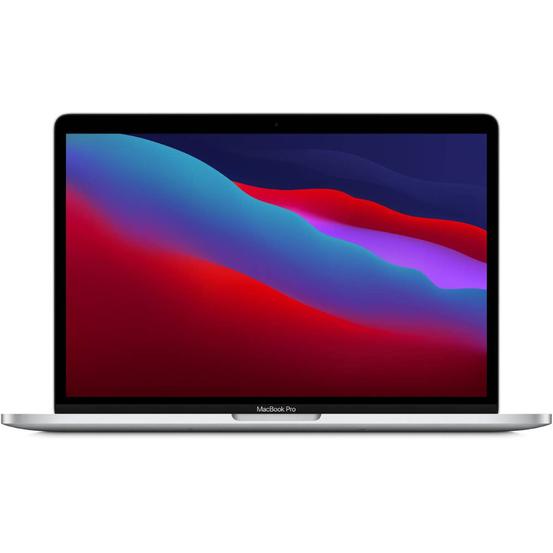 The Apple MacBook Pro 13-inch with M1 chip / 256GB SSD features an 8-core CPU that flies through complex workflows in photography, coding, video editing and more. An incredible 8-core GPU that crushes graphics-intensive tasks and enables super-smooth gaming. An advanced 16-core Neural Engine for more machine learning power in your favourite apps. Superfast unified memory for fluid performance. And the longest-ever battery life in a Mac, at up to 20 hours. It’s Apple’s most popular pro notebook. Much more performance and much more pro.

MacBook Pro is completely transformed by the Apple M1 chip, for up to 2.8x more processing power, 5x faster graphics and up to 20 hours of battery life - the longest ever in a Mac. So you can push everything further, everywhere you go.

The Apple M1 is the first chip designed specifically for Mac by Apple. Packed with an astonishing 16 billion transistors, the Apple M1 system on a chip (SoC) integrates the CPU, GPU, Neural Engine, I/O, and so much more onto a single tiny chip. With incredible performance, custom technologies, and industry-leading power efficiency, M1 is not just a next step for Mac — it’s another level entirely.

Security
The M1 chip and macOS Big Sur give MacBook Pro advanced security and privacy features beyond anything in its class, helping to keep your system and your data protected.

Apple's M1 chip makes MacBook Pro outrageously fast and powerful. Its 8‑core CPU rips through complex workflows and heavy workloads, with up to 2.8x faster-processing performance than the previous generation — all with unbelievable energy efficiency.

The 8-core CPU in M1 is the highest-performing CPU Apple has ever built, by far. It combines four performance cores and four efficiency cores that work together to tackle demanding multithreaded tasks, resulting in a quantum leap in performance at a fraction of the power — and a significant boost to battery life.

Four performance cores
The high-performance core is the world’s fastest CPU core when it comes to low-power silicon — and M1 has four of them combining their efforts for a massive boost in performance.

8-core GPU for up to 5x faster graphics performance

The 8-core GPU in M1 is Apple's most advanced graphics processor. And it brings the world’s fastest integrated graphics in a personal computer, delivering a ridiculous 5x boost in graphics horsepower.

Eight dedicated graphics cores
Get ready to create and play beyond your wildest dreams. With eight powerful GPU cores tasked with making graphics smoother, faster, and breathtakingly beautiful — it’s a MacBook Pro you have to see to believe.

Incredible graphics performance
Render 3D titles up to 5x faster in Final Cut Pro. Fluidly design intricate scenes in Unity with up to 3x faster graphics. And blast through games with supersmooth frame rates when it’s time to play. Feast your eyes on the world’s fastest integrated graphics in a personal computer.

Developed to unlock the potential of the M1 chip, macOS Big Sur transforms your Mac with major performance benefits and so much more. Powerful updates for apps. A beautiful new design. Industry-leading privacy features and best‑in‑class security.

Instant Computing | Drastically reduced load times
The M1 chip and macOS Big Sur work together to make the entire system snappier. MacBook Pro wakes instantly from sleep. Everyday tasks from flipping through photos to browsing Safari are faster. And your hardest-working apps all have access to the power they need.

16-core Neural Engine for up to 11x faster Machine Learning

How does it work?
Machine learning lets apps build and apply models based on massive amounts of data — to do things like identify friends and family in photos and videos, interpret natural language for dictation, and even analyze the audio to recognize laughter, applause, and more.

With the brilliant Retina display, images take on an incredible level of detail and realism. Text is sharp and clear. Bright LED backlighting delivers deep blacks and bright whites. P3 wide colour brings even more vibrant greens and reds than sRGB. And every MacBook Pro features True Tone technology, so the white balance automatically adjusts to match the colour temperature of the light around you — for a more natural viewing experience.

Thanks to M1, the FaceTime HD camera can now take full advantage of Apple's latest image signal processor — improving image quality in video conferences and pulling out more details in both shadows and highlights. And whether you’re running a meeting, hosting a podcast, or connecting with friends and family, new studio-quality mics will make sure everyone hears you loud and clear.

Magic Keyboard lets you do everything faster and more efficiently. The refined scissor mechanism delivers a responsive, comfortable, and quiet typing experience. The Touch Bar puts the commands you need most right where you need them, saving time and keystrokes. And Touch ID provides fast, easy authentication for secure logins and purchases.

Wi-Fi 6
The next generation of Wi‑Fi isn’t just faster — it keeps MacBook Pro going strong even as more and more devices join the network.

Thunderbolt / USB 4
Ultra‑high bandwidth meets ultra‑versatility. Thunderbolt enables data transfer, charging, and video output all through a single port — and MacBook Pro has two of them.