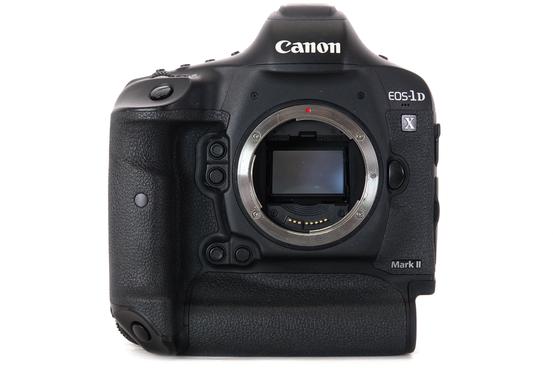 4 ⭐⭐⭐⭐ This Canon EOS 1DX MKII has been fully tested and serviced by our team of camera experts and works like new. There are some signs of previous use, but what fun is a rental if you don’t use it? Any signs of previous use are minor and superficial and there are no notable marks or scratches. All the photos to the left are of the item you would receive so you can see for yourself (yes, we really have someone downstairs photographing every preloved product). Shutter count: 127,050 Includes: Battery, charger, USB cable, strap and the original packaging.

EOS-1D X Mark II, the new flagship DSLR engineered to put the ultimate combination of image quality, resolution and speed in the palm of your hand.

Featuring a new 20.2 MP full frame CMOS sensor and new Al Servo AF III+, as well as 4K video capture up to 60p.This blend of power and performance makes the camera an essential companion for virtually all professional photographers.

Breaking the boundaries of high speed shooting, the EOS-1D X Mark II is able to shoot 14 frames per second with full AF/AE tracking and in RAW, equipping you to capture the exact moment of a sporting event, or burst of emotion.
The EOS-1D X Mark II can also shoot up to 16fps in Live View mode without AF. With the new CFast 2.0™ card capability, the camera can deliver a burst of unlimited JPEGs or 170 RAW images in continuous high speed shooting.

Canon’s heritage in 4K movies culminates in the EOS-1D X Mark II, giving film-makers the option of shooting 4K (4096x2160) in a variety of frame rates up to 60fps to the CFast 2.0™ card. Decisive moments from a 60fps 4K scene can be extracted as a high resolution 8.8MP still, giving you even more control over the exact moment of capture.

An improved 61-Point High Density Reticular AF II system with 41 cross-type AF points, which covers an expanded area and focuses under low light up to -3EV. For the first time, when shooting with selected extenders and telephoto lenses, the new 61-Point High Density Reticular AF II system also offers f/8 AF support with all 61 points, giving you the freedom to choose the focus point.

The EOS-1D X Mark II features an improved grip and controls, offering enhanced operability that feels natural in the hand, and weather proofing makes it resilient against the elements, ideal for outdoor shoots
Built-in GPS records shooting locations in EXIF data, helping pros keep an accurate record of their shoots.