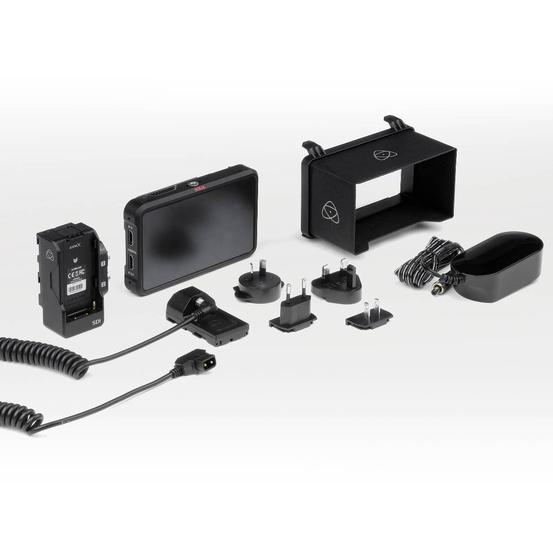 Expand your on-camera monitoring and recording with the Atomos Ninja V Pro Kit available. With options all the way up to 12-bit 4K60 ProRes raw this kit is designed to bridge the gap between mirrorless and cine-style cameras, this kit pairs the popular Ninja V 5" Recording Monitor with an AtomX SDI module, an Atomos Connect 4K, and a pre-activated SDI Raw key.

Multiple recording options for both HDMI-output mirrorless cameras and SDI-output cine-style cameras, allows free choice of the latest cameras for each job you take on. This kit's AtomX SDI module adds two 12-SDI ports to the Ninja V monitor's HDMI output, offering the flexibility of up to three simultaneous video outputs. The SDI raw license enables support of up to 12-bit 6K ProRes raw video via both the HDMI and SDI outputs, as well as 4K ProRes. Cross conversion options include HDNI raw to SDI output and the ability to crop and down-convert DCI and UHD 4K for compatibility with EVFs and wireless video transmitters/receivers without adding other converters. A sunshade, battery eliminator, and a locking D-Tap power cable round out this handy kit.

Note: Product is shown in use for illustration only, additional equipment is not included.

The Atomos Ninja V is a 5" on-camera monitor/recorder that records and plays back DCI 4K, UHD 4K, and HD video from purpose-built mini-SSDs. It features a 10-bit FRC IPS screen with a brightness of 1000 cd/m², which makes it suitable for use in both exterior and interior conditions. The AtomHDR display technology allows you to accurately monitor your log gamma footage without having to view flat, washed-out looking images or use a LUT to compress the dynamic range and colour space. The monitor supports popular log formats from Sony, Canon, Panasonic, ARRI, RED, and JVC cameras. The settings only affect viewing, with recorded video remaining unaltered.

Eliminate your camera’s internal compression and time limits – record up to 4K 10-bit HDR video direct from your camera's sensor over HDMI 2.0. Record 4K 12-bit RAW with enabled cameras. Teamed with a 1TB AtomX SSDmini you can now achieve up to 150 minutes of 4K ProRes recording on a single drive! And when you’re done, your edit-ready ProRes, ProRes RAW and DNxHR recordings are stored on affordable SSD drives.

Built to withstand the rigors of production, the Ninja V features an aluminum chassis and powers from a single L-series battery. Additional features include a variety of onscreen exposure analysis, framing, and focus assist tools, as well as anamorphic de-squeeze. A power supply and SSD Caddy are included with the unit.

Incoming video signals can be recorded in a wide range of Apple ProRes and Avid DNx codecs which maintain high quality while not requiring the storage space of uncompressed video. Both ProRes and DNx are edit-friendly, requiring no conversion in post-production to ensure smooth playback and compatibility with most common video editing software.

Photographers have long known about the benefits of RAW for stills, now Nikon Z 6 and Z7 users can get the same power of RAW in video. Capturing Apple ProRes RAW video with the Ninja V unlocks complete control of the video image at the highest quality possible. The maximum dynamic range, colour accuracy and detail is preserved, while at the same time every aspect of the video image can be controlled with precision for maximum creativity. Colours can be easily matched and the extra information means footage can be easily be manipulated in post-production, which is especially useful for grading and VFX shots.

Record high-resolution 4K footage in DCI or UHD formats up to 60 fps, including 24 and 25 fps for a more film-like aesthetic. All recordings are stored as high-quality Apple ProRes or Avid DNxHR files with 10-bit 4:2:2 chroma subsampling. A variety of bit rates are available to fit your project and storage needs.

With AtomHDR you can monitor up to ten stops of dynamic range of your camera's LOG image. Most conventional monitors can only display six or seven stops, which is fine for standard footage; but a Log image will look overly flat. It is also superior to monitoring with a loaded LUT, which can clip the highlights and mask shadows.

Log and HDR signals can be difficult to monitor with conventional equipment. Though, with the Ninja V's built-in HDR signal management functions, the log signal can be converted to the PQ standard for compatibility with existing consumer and professional HDR equipment.

The new Ninja V features a stunningly bright 5.2” 10-bit HDR monitor with an astounding 1000 nits of output and it displays 10+ stops of dynamic range in realtime from Log/ PQ/HLG signals. The sleek aluminium body is crafted for maximum durability, weighing in at just 360g and measuring only 25mm thick – easily attaching to any camera rig.

The Ninja V features a 5" IPS LCD screen that is illuminated by a bright 1000 cd/m² LED backlight, making it possible to view in daylight without requiring a hood. Plus, the screen is also colour calibrated from the factory to ensure accurate image representation.

The Ninja V supports Anamorphic de-squeeze, allowing you to comfortably view anamorphic footage with a squeeze of 2x, 1.5x, 1.33, and Panasonic's 8:3.

Audio can be input and output via the multi-pin locking connector. Separately available breakout cables can provide XLR audio input with 48V phantom power and output. A 3.5mm headphone jack on the side can be used for convenient audio monitoring.

The AtomX SDI Module brings 12-G SDI I/O to your Ninja V monitor/recorder. The module supports 4K at up to 60p as well as 2K at up to 240p and is a simple addition to your Ninja V, mounting to the expansion port in the battery slot. The 12-G ports are user assignable as input or output and support industry standard DI formats. The AtomX provides numerous playback options including HDR. The AtomX passes power from an L-series battery to your Ninja V without significantly increasing the footprint of your Ninja V.

The Atomos Connect 4K provides HDMI to USB conversion for live streaming applications. It allows you to run an HDMI signal to your Mac or Windows computer's USB port for use in streaming applications such as OBS, Twitch, and YouTube Live. Connect 4K accepts up to a UHD 4K30 HDMI signal and outputs up to a 1080p60 signal over USB. You can connect an HDMI camera to use as a webcam, gaming systems for live streaming gameplay, monitor signals, and signals from various other devices. When used with the Atomos Shogun 7 monitor, which is capable of recording and switching four 1080p60 signals, Connect 4K allows you to send the switched feed to your computer for streaming.

Connect 4K automatically converts your HDMI input to the universal USB Video Class standard (UVC) for compatibility with popular CDN platforms that supports UVC, such as Skype, MS Teams, Zoom, Twitch, YouTube, and many more. It can also be used with professional streaming applications such as OBS, StreamLabs OBS, Wirecast, and X-Split for enhanced multimedia streaming. The pocket-size design of Connect 4K makes it a handy and very easy-to-use device. Connect 4K is powered from your computer's USB port and requires no external power supply. It supports up to 49' HDMI AWG26 certified cables.

Atomos Connect is an HDMI to USB converter that allows you to take 4K (up to 30p), HD (up to 60p) or 720p (up to 60p) sources and output the same resolution and frame rate up to a maximum of 1080p60 ready for connection to the USB input on a computer and out to your choice of streaming platform.