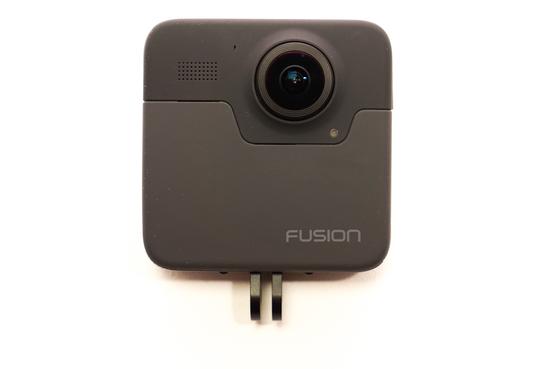 GoPro Fusion makes it simple for you to capture gorgeous, highly detailed 360 degree video. Stable imagery, 5.2K resolution, and OverCapture ensure that you won't miss a single detail of your adventure with the GoPro Fusion.

This GoPro Fusion is in great physical and working condition, and shows only minimal signs of previous use attributable to prior use. Included is a battery, USB C cable and a hard case.


The GoPro Fusion makes it simple for you to capture gorgeous, highly detailed 360 degree video. Stable imagery, 5.2K resolution, and OverCapture ensure that you won't miss a single detail of your adventure with the GoPro Fusion.

360 Degree Video
The GoPro Fusion enables you to shoot spherical video to capture the entire environment around you. By shooting in every direction simultaneously, the Fusion lets you create immersive 360 degree experiences that put your friends and viewers into the centre of your world.

Stable Images
Internal stabilisation software ensures that with the GoPro Fusion you can create smooth looking video even without the use of a gimbal.

Immersive Audio
Not only can you shoot 360 video, but the GoPro Fusion takes things to another level by recording 360 degree audio. Multiple microphones allow the Fusion to absorb sound clearly from every direction, resulting in an immersive soundscape accompanying your finished video.

5.2K Resolution
Image quality is of paramount importance when creating 360 degree video, and the GoPro Fusion delivers on that front with the capability to shoot video in 5.2K at 30 FPS. Your content will also look completely natural thanks to seamless video stitching.

OverCapture
The OverCapture system of the GoPro Fusion makes sure that you will always find the perfect shot, either live on the day or in post. With everything captured, you can search through your footage to reframe your video and crate the perfect image.

Professional Standard
The GoPro Fusion allows you to take stunning 18MP spherical photos, as well as the ability to shoot in a number of different ways with Single, Burst, Time Lapse, Night, and Night Lapse photo modes at your disposal.