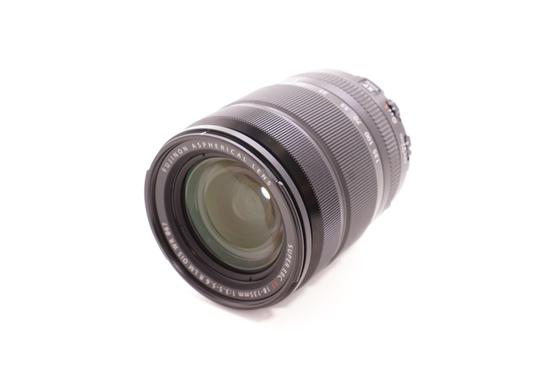 Fujifilm 18-135mm lens is in great condition overall, showing only very minimal signs of previous use. Some scratches on the lens cap. This lens comes with a lens hood, manuals and the original packaging.

In order to realize the world's most advanced 5.0-stop image stabilization performance, performance to detect movement in the low-frequency band was improved, and an algorithm to accurately sense blur from the detected signal was developed. Correction performance improved by 2 times in the low-speed shutter range. This helps to support a lightly-equipped shooting style without the use of a tripod.

A weather resistant structure with applied sealing on 20 areas on the lens barrel is tough against various changes that occur in a natural environment, such as sudden rain, dust, and splashes of water.

Users can focus more on shooting by using the lens together with the premium mirrorless camera FUJIFILM X-T1, which has a weather resistant structure, as well as with the dedicated vertical grip "VG-XT1".

In order to improve the feel when adjusting zoom, a ventilator is placed in the interior of the bottom of the lens barrel. The structure effectively prevents dust particles and moisture from getting into the lens to allow for smooth operation.

A wide shooting range, image stabilization function, and a weather resistant structure are realized in a size that weighs only 490g. When combined with the FUJIFILM X-T1, a light weight of just 930g will expand the area of activities of the photographer to help capture more photo opportunities.

4 "aspherical lenses" have been adopted, each of which deliver the performance of multiple general spherical lenses together, are used to realize extremely short optical length. With an easily maneuverable size and good holding balance with the total lens length, a comfortable shooting style is promised.