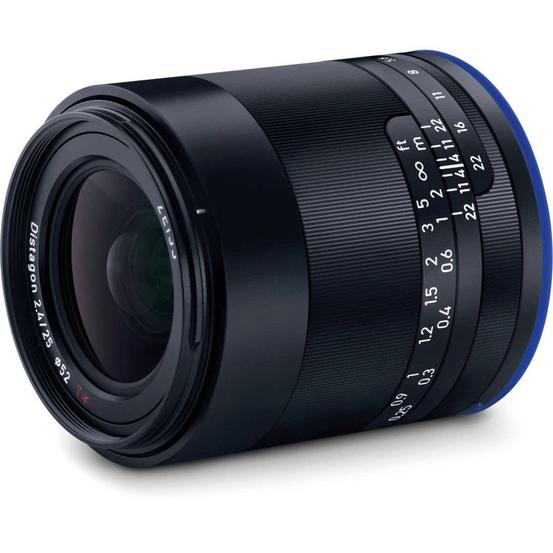 An impressive wide-angle characterized by its sleek form factor, the ZEISS - Loxia 25mm f/2.4 - Sony FE Mount is a versatile prime well-suited to variety of shooting applications, including landscape, nature, architecture, interior, and astrophotography. Utilizing a Distagon-type optical design, this lens uses one aspherical element and two anomalous partial dispersion elements to control both spherical and chromatic aberrations for improved sharpness and clarity. An enhanced ZEISS T* anti-reflective coating has also been applied to significantly reduce ghosting and lens flare for improved contrast and color fidelity.

Loxia-series lenses are distinguished by their manual focus operation along with a manual aperture ring that can be de-clicked for silent operation; making them especially suitable for filmmaking applications. Loxia lenses are also characterized by their all-metal lens barrel, which incorporates engraved focusing and depth of field scales, for fine-tuned control. Additionally, the lens body sports a dust- and moisture-sealed design to permit its use in trying environments.

Despite its compact design, the universal wide-angle ZEISS Loxia 2.4/25 lens offers outstanding image performance across the entire image field of a full-frame sensor. Whether it’s for landscapes, architecture shots or subjects in close-up against a broad background, this focal length with its large image angle is an excellent addition to the ZEISS Loxia lens family – and a universal new lens for wide-angle fans who want to capture even the tiniest details in a photo or video.

This wide-angle prime is designed for full-frame Sony E-mount mirrorless cameras, however can also be used with APS-C models where it provides a 37.5mm equivalent focal length.

One completely new feature of the Loxia lens is that you can ‘declick’ the aperture’s locking mechanism using a tool (supplied) and an adjustment screw on the bayonet surface. This means that for video applications, you can smoothly eliminate any unwanted differences in brightness as you pan the camera. This feature can also be used with other video systems whose size makes them suitable for adaption.

Manually focusing a lens means controlling the image result from your fingertips. A good ergonomic design makes all the difference. ZEISS lenses stand out with their large rotation angle which enables precise focusing. Changes are immediately visible in the viewfinder. The high-quality focusing mechanism moves smoothly without play, thus also supporting the intuitive interaction with the focal plane. The precise engraving in meter and feet, and the depth of focus scale provide additional support for manually focusing.

Dramatic perspectives and a view from extraordinary image angles – ZEISS lenses open up new composition possibilities. Distortion would disrupt the composition because straight lines, whose image does not go through the image center, would be reproduced with a curved shape. This annoying effect is accordingly and largely compensated through elaborate optical designs at all focal lengths.

Tangible quality that holds its value is what qualifies ZEISS lenses for decades of hard use. A precision-engineered full-metal casing, grippy focus and aperture rings made of metal, and a tough front bayonet and filter screw guarantee stunning photographic results. A special sealing ring on the bayonet also protects the interface between the camera and the lens.

The ZEISS Loxia lenses are suitable for use with the mirrorless Sony Alpha cameras with E-mount and were optimized for sensors up to full 35 mm format (24 x 36 mm). With the ZEISS Loxia lenses, the aperture is controlled manually. This allowed the integration of the so-called DeClick feature of the mechanical aperture ring. The cameras feature the corresponding automatic exposure control (A) and manual exposure control (M).


What's In The Box