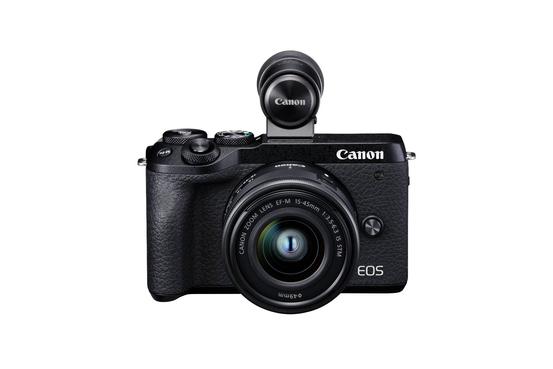 The Canon EOS M6 Mark II with EFM15-45 Lens and EVFDC2 is a great balance between still and movie specs for the enthusiast or beginner photographer/videographer that want a little more out of their equipment. Canon packed a new and improved 32.5 Megapixel APS-C image sensor into the M6 MarkII and their DIGIC 8 image processor, resulting in 14 frames per second continuous shooting, a 30 frames per second RAW burst mode and 4K 25p videos with no crop with Dual Pixel AF enabled!

Included with the camera body is the versatile standard zoom EF-M 15-45mm f/3.5-6.3 IS STM lens, which provides a 24-72mm equivalent focal length range. Three aspherical elements help to control chromatic aberrations and distortions throughout the zoom range and an optimized lens placement works to reduce flare and ghosting. An Optical Image Stabilizer works to minimize the appearance of camera shake by up to 3.5 stops for sharper handheld shooting and an STM stepping motor provides fast, smooth, and near-silent autofocus performance.

The EVF-DC2 Electronic Viewfinder from Canon is also included and offers the ability to shoot at eye-level, the EVF-DC2 Electronic Viewfinder from Canon is an external EVF for select EOS M-series and PowerShot cameras. This auxiliary finder attaches to the camera via its hot shoe and features a 0.39" 2.36m-dot OLED display for clear, high-resolution viewing. Additionally, the viewfinder offers built-in dioptric adjustment and has a 22mm eyepoint distance to suit eyeglass-wearers.

Featuring a 32.5MP APS-C CMOS sensor and DIGIC 8 image processor, the M6 II is capable of producing high-resolution imagery with notable clarity and minimal noise, as well as a native sensitivity range of ISO 100-25600 that can be further expanded to ISO 51200 to support working in low-light situations. The sensor and processor combination also avails fast performance throughout the camera system, including the ability to shoot continuously at up to 10 fps or record 4K 25p movies with no crop and Full HD 100p high frame rate for slow motion video.

Eye AF can be set during Servo AF and Movie Servo AF. After detecting, it can automatically focus on the eyes of a person's face. Since AF can track even in continuous shooting up to about 14 fps or RAW burst mode up to about 30 fps, it is possible to track the eyes with high precision and shot natural expressions even when shooting subjects continue moving.

Dual Pixel CMOS AF offers smooth and fast focusing performance in a similar manner to how a camcorder acquires focus.

This system integrates two separate photodiodes within each pixel to provide a broad and dense network of phase-detection gathering elements across most of the image sensor to reduce focus hunting for faster, more direct control of focus placement.

For still imagery, this focusing system works to acquire focus quickly and accurately, making it ideally suited to shooting and tracking moving subjects so that critical focus is attained with each shot.

When shooting video, a Movie Servo AF mode offers smooth and natural focusing when changing from different subjects or different distances within the scene, as well as the ability to specify tracking sensitivity, AF speed, and Face Tracking priority.

Rack focus is possible simply by touching elements within the scene on the touchscreen in order to change focus in an intuitive manner. Subject tracking in movies is also heightened due to the Dual Pixel CMOS AF system's ability to recognize subjects and maintain focus when working within changing or cluttered scenery.