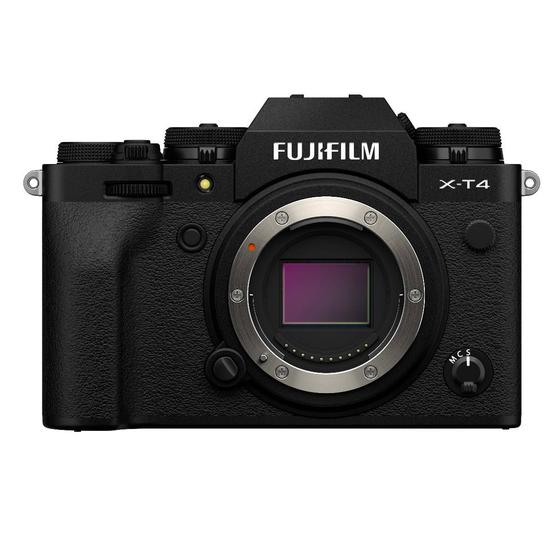 The Fujifilm X-T4 Body - Black delivers the highest performance in both stills and video. Utilizing a proven and well-regarded APS-C-format 26.1MP X-Trans CMOS 4 sensor, the X-T4 is capable of high-resolution recording. Featuring a new re-designed shutter unit the X-T4 has been developed to be fast, durable and quiet. With the fastest ever autofocus performance in an X Series camera, thanks to a new AF algorithm, users can now capture decisive moments that they may have missed before.

The X-T4 is also the first model in the X-T Series to feature in-body image stabilisation (IBIS), dramatically boosting the potential of the camera for stills and video shooting. The stand-alone video mode is now activated with a simple switch, and the use of digital image stabilisation in the video mode provides unparalleled shooting smoothness. This allows users to immerse themselves in video production.

Combined with FUJIFILM’s colour reproduction technology nurtured over 85 years of R&D for photographic films, the X-T4 delivers a wide variety of options to recreate a scene exactly as it is remembered. The new Film Simulation mode, ETERNA Bleach Bypass, simulates the traditional film processing technique to create a unique world of low saturation and high contrast.


Key Features of the Fujifilm X-T4

Being an X-Trans sensor, it utilizes a randomized pixel array, which provides a high degree of image quality and sharpness due to the omission of an optical low-pass filter. Versus conventional pixel patterns, the X-Trans design more closely mimics the organic nature of film in order to produce nuanced colours and tonal transitions, while also reducing moiré and aliasing.

The X-T4 is equipped with an ultra-fast focal plane shutter with a newly developed high torque coreless DC motor. This shutter has the capability to shoot up to 15fps in burst mode and has advanced response performance with a shutter release lag of just 0.035 seconds.

An expanded phase-detection autofocus system with 425 selectable points covers nearly the entire sensor area delivers fast and accurate focusing performance in a variety of lighting conditions down to -6 EV.

The new algorithm and phase-detection AF’s processing capability has led to autofocus performance as fast as 0.02 seconds. Ensuring that you can capture and track a subject moving at high speed.

The X-T4 offers a versatile array of video capabilities, including internal DCI/UHD 4K recording at up to 60 fps and Full HD recording up to 240 fps for up to 10x ultra slow-motion playback. Greatly benefitting overall video performance, the speed of the X-Processor 4 enables fast read speeds when recording video and helps to reduce rolling shutter distortion when filming moving subjects.

In addition to the supported 10-bit colour depth, the X-T4 also includes the F-Log gamma setting, which provides a flat picture for use in advanced colour grading software during editing. This maximizes the potential dynamic range in difficult scenes and image adjustments can be made, as well, to highlight tone, shadow tone, colour, and sharpness.

As expected from an X-T series camera the X-T4 takes advantage of FUJIFILM's vast history in traditional film-based photography integrating several other Film Simulation modes, mimicking the look and feel of some of FUJIFILM's classic film types: