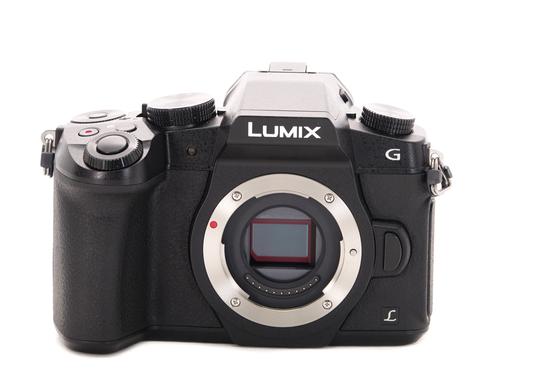 4 ⭐⭐⭐⭐ This Panasonic Lumix DMC G85 has been fully tested and serviced by our team of camera experts and works like new. There are some signs of previous use, but what fun is a rental if you don’t use it? Any signs of previous use are minor and superficial and there are no notable marks or scratches. All the photos to the left are of the item you would receive so you can see for yourself (yes, we really have someone downstairs photographing every preloved product). Shutter count: 828 Includes: battery, charger, USB cable, Lowepro Adventura SH140 and user manuals.

Designed for video and stills shooters alike, the Lumix DMC-G85 from Panasonic is a versatile Micro Four Thirds camera characterized by its quick performance, flexible photo capabilities, and UHD 4K video recording. Using a 16MP MOS sensor, this mirrorless camera has a sensitivity range from ISO 200-25600 to suit working in a variety of lighting conditions, and also affords quick shooting speeds up to 10 fps with single-shot autofocus, or 6 fps with continuous autofocus, as well as up to 40 fps when using an electronic shutter function and 30 fps at 8MP with 4K PHOTO Modes. Benefiting working in difficult lighting conditions, 5-axis sensor-shift image stabilization can be used to dramatically reduce the appearance of camera shake, and this IS system pairs with select lens' image stabilization systems for Dual I.S.

Complementing the imaging attributes, the camera also incorporates both a 2.36m-dot electronic viewfinder as well as a 3.0" 1.04m-dot touchscreen LCD, which has a free-angle design to better enable working from high and low angles. Built-in Wi-Fi is also integrated into the design, which facilitates wireless image transferring and remote camera control from linked smartphones or tablets. Additionally, the body construction is weather-sealed to guard against dust and moisture for working in inclement weather conditions.


16MP Live MOS Sensor
Using a 16MP Live MOS sensor, the G85 is capable of capturing clear, high-resolution stills as well as UHD 4K video. The sensor's design omits an optical low-pass filter in order to achieve a high degree of sharpness and resolution, and its design also affords a sensitivity range from ISO 200-25600 to suit working in a variety of lighting conditions.
Additionally, fast shooting performance is also afforded, with the ability to shoot at up to 40 fps with an electronic shutter function, 30 fps at 8MP using the 4K PHOTO Modes, 10 fps with AF-S and an electronic shutter, or 9 fps using a mechanical shutter with AF-S.

In addition to the versatile still shooting modes, the G85 also supports recording UHD 4K (3840 x 2160) video with either 30p or 24p frames rates at 100 Mbps. Full HD 1080p/60 is also supported at 28 Mbps in the MP4 format, along with HD recording and Full HD in AVCHD. A built-in stereo microphone can be used during recordings, and features an integrated wind-cut filter for cleaner audio quality when shooting outdoors, or an optional external mic can be used via the 3.5mm jack.

Utilizing the 4K video recording capabilities, a trio of still shooting modes are available for recording continuous 8MP stills at a 30 fps shooting rate:
4K Burst:
Just as with video recording, this mode will allow you to continuously record 8MP images at 30 fps for up to 29 min. 59 sec, making it ideal for instances where you need a fast frame rate in order to capture the best moment.
4K Pre-Burst:
This mode is ideal for times when you're unsure of the critical moment to press the shutter button and will record 8MP images at 30 fps one second prior to and one second after pressing the shutter button in order to give you 60 frames to choose from.
4K Burst (S/S):
This mode most closely follows the 4K video recording process, and allows you to playback your video, pause at the chosen moment, and use the shutter button to mark a chosen frame from the video and save it as a single 8MP frame.

For accelerated autofocus performance, DFD (Depth-From-Defocus) technology is employed to quickly calculate the distance to subjects and adjust the focusing position in order to suit working with continuous shooting rates up to 6 fps with continuous AF. This contrast-detection type focus method benefits both still and video recording modes, as well as subject tracking applications where subject color, size, and motion vectors are used to intelligently lock-onto the moving subjects and ensure precise focus. Additionally, supporting working in low-light conditions, a Starlight AF feature enables accurate AF performance down to -4 EV.
Benefiting manual focus operation, focus peaking is available that highlights bright edges of contrast with a colored outline for quickly recognizing your focus point, as well as Touch MF Assist for touch-to-focus operation.