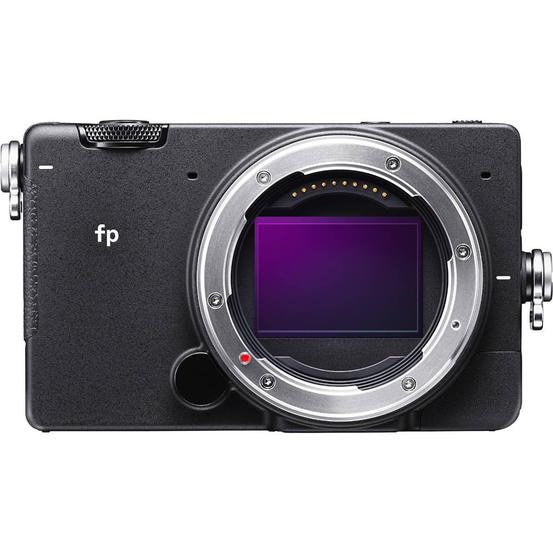 The Sigma FP Digital Camera packs high-end specs for both sills and video in an extremely compact body. Sporting a full-frame 24MP BSI Bayer CMOS sensor, 14-bit colour depth in DNG format (stills) and electronic image stabilisation, the fp and its fully electronic shutter provide a maximum resolution for raw and JPEG files of 6000 x 4000 and a shooting rate of 18 fps, while its focus system employs contrast detection and a 49-point selection mode for AF measurement distance, as well as face detection, eye detection, and focus peaking.

A base sensitivity of ISO 100-25600 can be expanded to ISO 6-102400, and its video recording capabilities allow for UHD 4K recording at up to 25p, while Full HD recording can be captured at up to 100p. For raw video data, 12-bit CinemaDNG external recording is supported.

Aside from professional cinema cameras, the SIGMA fp is the first interchangeable-lens mirrorless type digital camera that supports external recording in 12-bit CinemaDNG format. With up to 4K UHD/25fps recording, it produces video data that can be used even in filmmaking.
It also supports All-I (All-Intra) recording, which makes it possible to maintain high image quality while reducing file size, allowing light data available for recording and editing. The record format that best suits the purpose of the video can be selected.

* The feature of playing CinemaDNG footages in-camera will be available via firmware update scheduled at a later date.

In the Cine mode, the SIGMA fp supports time code recording, which is useful in video editing. It offers either “Free Run” or “Rec Run,” and also switch between “Drop frame (DF)” and “Non-drop frame (NDF),” which allows the camera to send time code via HDMI output.

The SIGMA fp has a director's viewfinder function that allows the user to simulate different angles of view and how an image looks, on cinema cameras. It supports cameras by major manufacturers commonly used, including not only the latest large format cameras such as ARRI ALEXA LF and RED MONSTRO 8K but also film-based cameras and anamorphic lenses.

Note: The feature of recording/playing video with the director's viewfinder function enabled is to become available via firmware update scheduled at a later date.

Seamless transition between Still and Cine modes with optimized UI

Preserving the distinctive “feel” of SIGMA cameras' dials and QS (Quick Set) buttons, the SIGMA fp has a specially designed operating system and displays for each of the Still and Cine modes. At the flick of a switch, it can move back and forth between the two modes. This presents a new shooting experience that goes beyond the boundaries of traditional cameras that are designed either for stills or videos.

The SIGMA fp also sports a zebra pattern display, which shows areas of the image that are of specified brightness levels in stripes. This helps to check for overblown highlights and adjust exposure accordingly.

The SIGMA fp can display the shutter speed in shutter angle format, a feature commonly found on professional cinema cameras. Another professional monitoring feature found in the Sigma fp is the inclusion of a waveform display for visualising the exposure of a scene in a numerical manner based on the signal information.

One color grade style that has been widely used in Hollywood films has inspired a new colour mode introduced in the SIGMA fp, called “Teal and Orange.” This new colour mode is about creating high contrast between orange colors, which are found in human skin tones, and teals (cyan blue), which are their complement, for visuals that are highly vibrant and deeply dramatic. It can be used in both the Still mode and Cine mode.

In addition to genuine accessories designed exclusively for the SIGMA fp, the camera supports cinema camera-like user interfaces. It has solid compatibility that makes it a perfect camera that fits right into filmmaking settings.

* The camera menu setting for connecting to UVC devices is to become available via firmware update scheduled at a later date.

The Face/Eye Detection AF function allows the SIGMA fp to focus automatically on the eyes of a human subject. It can bring the eyes of the model into focus instantly and precisely, even when shooting portraits using a large-diameter lens with a shallow depth of field.

The SIGMA fp employs a full-time electronic shutter, enabling to shoot virtually without sound, and no camera shake due to shutter shock. Even when shooting in quick succession at a frame rate of 18 frames/sec., it eliminates the tiniest of shakes.

Furthermore, the absence of a mechanical shutter makes the SIGMA fp's camera structure simpler, which in turn improves its reliability as a camera.

The SIGMA fp detects and controls image flickering, a phenomenon that can occur when shooting with artificial light sources.

The SIGMA fp is capable of taking pictures at shutter speeds of up to 1/8,000 sec.

The Sigma fp incorporates an electronic image stabilization (EIS) function. By taking advantage of the electronic shutter, it is capable of instantaneously taking three frames, comparing them, and creating a composite image into a still image or video with minimum blur.

This camera has an automatic bracketing function with settings for ±3 EV.

SIGMA fp comes with a feature to make "Cinemagraphs", which are animated GIFs that are a hybrid between still photography and video. With this function, the SIGMA fp is capable of creating unique imagery, where parts of a still image keep moving, in-camera.

Note: The Cinemagraph function will be available via firmware update at a later date.

Designed and inspired by those used on professional cinema cameras, a large-size heat sink is mounted between the LCD and camera body. Combined with a heat dissipation coating applied to the outer surface, the SIGMA fp achieves highly effective heat dissipation. It prevents overheating at high temperatures or in long hours of use.

The 3.15-inch (3:2) liquid-crystal display is complete with a touch screen, for intuitive operation.

A body covered with die-cast aluminium on the front and the back ensures superior robustness and heat dissipation while keeping the body lightweight.

Same screw threads for both strap fittings and tripod

By using a DC connector (CN-21) (sold separately), the SIGMA fp can be powered from an AC power adaptor or a V-mount battery plate.