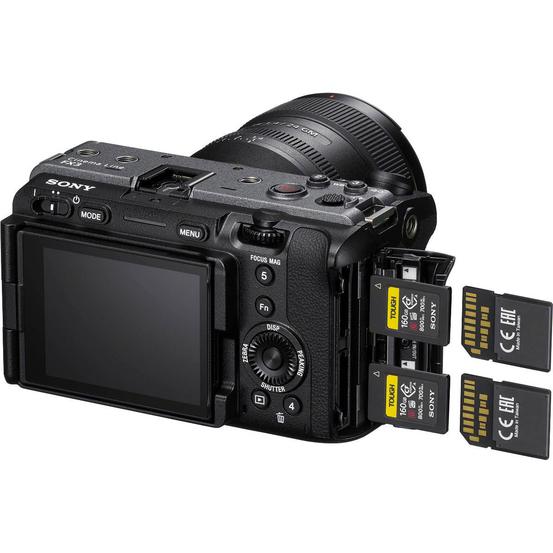 Sony melds the high-end video capture of the FX6 with the petite form of the a7S III familiar to so many mirrorless enthusiasts. Creating the Sony Cinema Line FX3 Full Frame E-mount Camera to bring the visions of passionate content creators to life, wether they are a single-operator, fully-fledged filmmakers looking for a b-cam or for still photographers branching out into video capture.

The compact and lightweight FX3, is easy to carry and handle with a body similar to that of the A7C. Its full-frame 12.1MP Exmor R BSI CMOS sensor and a BIONZ XR processor can capture up to UHD 4K video with 10-bit 4:2:2 colour sampling internally or output 16-bit RAW video over its full-sized HDMI port. Slow-motion video is also possible at up to 120 frames per second in 4k and up to 240 fps in HD. Well positioned for use as a B-camera on FX6, FX9, or even VENICE productions, the FX3's S-Log3 gamma curve and S-Gamut3.Cine makes colour-matching when used in full-on pro-grade productions a breeze. The Sony FX3 camera also includes Sony's S-Cinetone profile for natural skin tones and rich colours.

An expanded ISO range of 80 to 409,600 offers maximum flexibility and a dynamic range rated at over 15 stops ensures the signature shallow depth of field full-frame imagery contain both bright highlights and shadow details. The nuanced image capture is further enhanced by limited rolling shutter effects thanks to the high-speed sensor read-out afforded by the BIONZ XR processor.

The FX3 has been designed with multiple accessory threads to facilitate cage-free use, and it comes with a detachable, dual XLR/TRS adapter handle for pro audio capture. Operating features include an articulated, touchscreen LCD, multiple autofocus options, dual CFexpress card slots, and 5-axis, in-camera image stabilization that can be combined with an Active software mode for even more shake reduction. Sony has also included an active cooling system inside the camera that it says enables the Sony FX3 Full-Frame Cinema Camera to shot video for up to 13 hours uninterrupted.

Note: Product is shown in use for illustration only, additional equipment is not included.

This compact addition to Sony's Cinema Line blends the full-frame, S-Cinetone capture of the FX6 with the UHD 4K capture, autofocus options, and body size of the a7S III camera. The video-forward design of the FX3 also shares several handling and audio features with the FX6 and the ISO range and battery of the a7S III.

Capture the scene in cinematic 4K resolution, with the shallow depth of field, stunning bokeh and cinematic freedom made possible with a full-frame sensor.

The FX3's full-frame image sensor is coupled with innovative light-gathering techniques to let you capture clear and usable images even in dim light with 10.2MP video and 12.1MP stills capture. The standard ISO sensitivity of 80-102400 for movies is expandable all the way up to 409600. Together the 12.1MP Exmor R sensor and BIONZ XR processor produces cinematic expressions with shallow depth of field looks, impressive bokeh, and reduced rolling shutter artifacts.

The FX3 is capable of 4K internal recording, 10-bit depth and 4:2:2 colour sampling with All Intra on top of Long-GOP compression. This makes it possible to push your colour grades further while still retaining natural gradation, for true editing freedom. 16-bit RAW output via HDMI gives you even more freedom, while S-Cinetone provides rich colours and natural skin tones out-of-the-box.

4K 120fps Slow-motion
Even at high frame rates, detailed 4K imagery is captured thanks to the FX3's high-precision AF and high-speed readout capabilities. Slow and Quick (S&Q) mode gives you full control over the shooting frame rate, for beautiful motion sequences at up to 5x slow motion (with 24p output).

The FX3 offers an exceptional 15+ stops of dynamic range to handle settings ranging from well-lit interiors and outdoors in mid-day to morning and evening shots. Capture every nuance, and allow for unprecedented cinematic freedom in colour grading.

S-Log3 gamma curve and S-Gamut3.Cine enable shooting with high-quality colour reproduction over a wide dynamic range, and they make it easy to match up footage with shots from other Cinema Line cameras during post-production. In addition, an HLG (Hybrid Log-Gamma) HDR picture profile enables direct HDR (HLG) playback on compatible TVs with no post-production.

Sophisticated tracking features keep your subject in steady focus, so you can concentrate on composition. Real-time Eye AF ensures precise focus on the face and eyes, while Real-time Tracking is powered by Sony's unique AI-based subject recognition algorithms.

The FX3 includes AF Transition Speed in seven settings, to easily create rack focus, and five AF Subject Shift Sensitivity settings, which allows the user to customise how easily AF will switch or stay with the locked-on subject. You can also select the subject you want to focus on simply by touching the LCD monitor.

Your footage will be 'smooth as butter' thanks to Sony's Active Mode optical in-body 5-axis image stabilisation system in the Sony FX3 camera providing increased stabilisation for movie shooting. To preserve image quality, the gyroscope sensor accurately measures camera shake and compensates optically. This makes stable video possible even when shooting hand-held without gimbal use, while walking, and at 4K resolution.

With its compact size and light weight, the FX3 is designed for high mobility. The attached handle and cage-free accessory mounting holes make for fast setup, fluid shooting and quick pack-down. The main body and covers are constructed from a lightweight magnesium alloy to enhance durability and performance even in challenging environments.

Essential Controls Optimised for the Solo Shooter
In addition to six customisable buttons, frequently used controls are within easy one-handed reach, leaving your other hand free for lens operation or balance. And usability is enhanced by multiple screw holes on the body and handle, allowing accessories to be attached directly.

A handle equipped with an XLR adaptor with two full size XLR terminals can be attached to the Multi Interface (MI) Shoe on the camera for more comfortable and stable camerawork in difficult shooting situations, such as low-position shots.

In addition to the camera's convenient built-in microphone, a variety of professional microphones can be connected externally via the full-size XLR connectors on the handle. Three different recording formats can be selected, including 24-bit 4-channel. Digital audio recording is also possible by attaching a digital microphone such as the optional ECM-B1M even when the handle is not used.

Tally lights on the front and rear of the FX3 indicate whether the camera is recording at any given moment. They are clearly visible to both the camera operator and the person performing in front of the camera.

For uninterrupted 4K/60p recording, the FX3 is designed with an innovative heat dissipation system. Heatsink placement, airflow structure and a silent cooling fan work to optimise cooling even during long shoots.

A network connection, via Wi-Fi® or wired via a USB type C connector, provides support for remote control from smartphones or tablets, with either NFC one-touch or manual pairing. Remote shooting can be controlled from a PC with Sony's Imaging Edge Desktop™ application, or from a mobile device with Imaging Edge Mobile™. And captured still and movie files can be transferred using high-speed FTP.

Either wired or wireless remote shooting is available from a PC, or from a mobile device with Imaging Edge Mobile installed, for more efficient workflows and shooting in challenging environments. Imaging Edge Webcam™ enables high-image-quality online video communication.