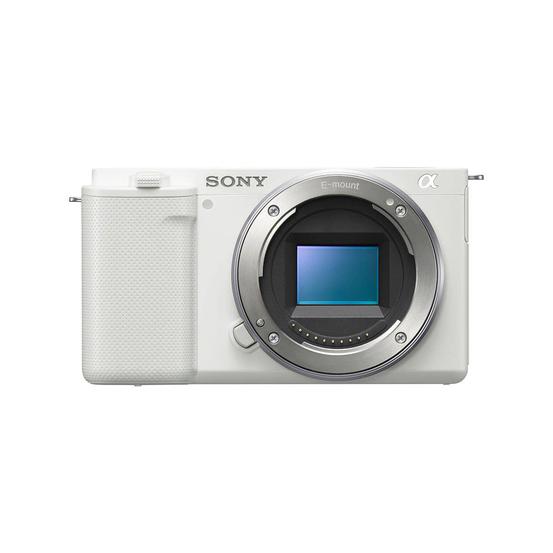 The Sony ZV-E10 Body camera is made for vloggers with a large APS-C sensor and mirrorless versatility with a specialized feature-set built just for content creators. Bring improved image quality, greater choice of lenses, and increased control to up your creativity when shooting.

This highly capable and portable camera incorporates a series of design choices and shooting modes that are ideal for single-person productions. A 3.0" vari-angle screen lets you accurately frame up shots, the integrated directional mic is purpose-built for recording more accurate sound from front-facing subjects, and shooting modes like Background Defocus and Product Showcase help you highlight specific subjects with ease.

The ZV-E10 revolves around a 24.2MP APS-C Exmor CMOS sensor, which enables UHD 4K video recording up to 30p, Full HD recording at 120p, and stills shooting up to 11 fps. Sensitivity ranges from 100-32000 for working in a variety of lighting conditions and the sensor's design also integrates a 425-point Fast Hybrid AF system for accurate tracking and detection of subjects.

Designed to the same standards as Sony's other Alpha E-mount cameras the ZV-E10 features an intuitive control layout along with the 3.0" vari-angle touchscreen LCD for intuitive settings control and framing. Audio is a main concern of vlogging and creative content, the ZV-E10 focuses on this aspect of recording by including a 3-capsule directional mic into the camera design as well as incorporating both 3.5mm mic and headphone ports and having the top Multi Interface shoe support a digital audio interface for improved audio quality.

Simplicity made for Professional Vloggers

The Alpha ZV-E10 takes full advantage of the many α technologies introduced in the last two years and integrates them in a dedicated interchangeable-lens vlogging camera. Additionally, many vlog-centric features found in the ZV-1 camera are also included, such as greater rendering of skin tones and Soft Skin Effect, to further smooth skin appearance. This, paired with the ability to change lenses, offers unparalleled expression for aspiring and professional Vloggers.

Blur backgrounds with the press of a button. The Alpha ZV-E10 supports the Background Defocus function - simply press the Bokeh Switch button and the Alpha ZV-E10 instantly goes to the widest aperture value of the attached lens for instant bokeh. Furthermore, the Alpha ZV-E10 also supports Product Showcase Mode. When presenting products to the camera, Product Showcase Mode instantly changes AF and image stablisation values to prioritise products which are held to the camera, then quickly focus back to the presenter.

Clearly record voices from either in front or behind the Alpha ZV-E10 thanks to the Directional 3-capsule Microphone. Incredible sound gathering performance and subtle noise reduction offers deeper realism from the audio captured. For greater audio recording, the Alpha ZV-E10 also supports Digital Audio Interface. When paired with compatible microphones, superior audio fidelity is recorded with minimal digital noise.

Along with the many Vlogging features, the Alpha ZV-E10 is also a more than capable stills camera. With a 24.2 MP image sensor and expandable ISO range up to 50-51,200, the Alpha ZV-E10 can deliver stunning photos capable of large-scale printing. Powered by Real-time Tracking, Sony’s AI based autofocus provides incredibly fast eye autofocus for both humans and animals. Capture burst shots with the highspeed continuous shooting at up to 11fps with AF/AE tracking.