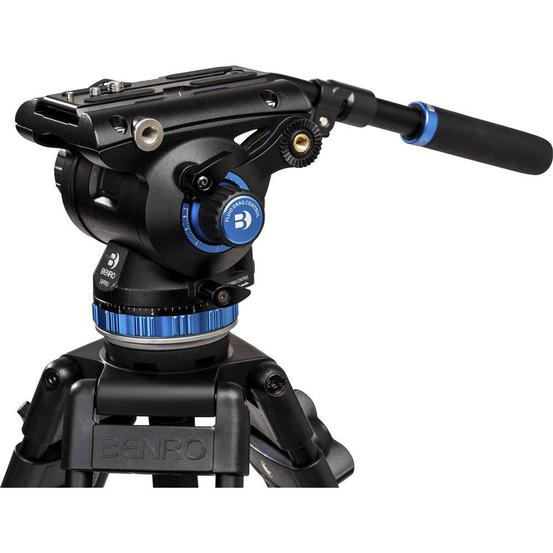 The Benro S8Pro is a versatile fluid video head for loads up to 7.98 kg. Featuring a 75mm flat base with a 3/8"-16 threaded hole, it can efficiently be moved between compatible tripods and sliders, jibs, monopods, and other support gear. To balance your heavy loads, the S8Pro offers 7+0 steps of counterbalance adjustable via a knob on the side. Another knob on the opposite side provides control over continuous pan and tilt drag. There are also independent pan and tilt locks. The tilt range is a wide +90/-75°, and the pan range is a full 360°.
Some parts of the head are made of magnesium and other parts of aluminum. Virtually the entire head, including its knobs, is made of robust yet lightweight metal. A pan bar is included that can be attached to a rosette adapter on the left or right side of the head, for left- or right-handed users. A camera plate is included that can be adjusted forward/backward to let you find the optimal balance for your camera. A safety lock on the plate ensures that once mounted, the plate won't slip out if you move it in either direction too much. Two camera screws are supplied—1/4"-20 and 3/8"-16—that can be stored underneath the camera plate on the head itself, in dedicated slots. For attaching accessories, there's a 3/8"-16 threaded hole on each side of the head to which you can secure articulating arms.

7.98 kg payload
75mm flat base with a 3/8"-16 thread
Compatible with 75mm flat base tripods and can be mounted directly on most sliders, jibs, and monopods
7+0 steps of counterbalance
Continuous pan and tilt drag
Independent pan and tilt locks
+90/-75° tilt range
360° pan range
Made of magnesium and aluminum
Rosette adapters on the left and right side for attaching the included pan bar
Sliding camera plate with safety lock
1/4"-20 and 3/8"-16 camera screws included and can be stored in dedicated spaces on the top of the head, underneath the camera plate
Two 3/8"-16 threaded holes for accessories