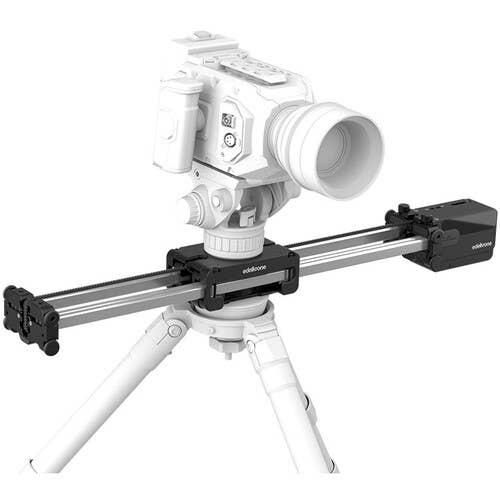 The edelkrone Slide Module v3 is an add-on attachment for all SliderPLUS sliders. It adds motorized capability to the slider, allowing for motion control from a companion iOS/Android app. You can set up stable motorized slides or easily program motion time-lapse and stop motion videos. Also, when the Slide Module v3 is attached to the slider, it can be synced up to other edelkrone motion control devices (such as the HeadPLUS pan and tilt device) to allow for synchronized multi-axis motion control from the same app.

While it does support app and optional IR remote control, the Slide Module v3 also allows you to manually adjust the positions and program the motions of your SliderPLUS (and optional HeadPLUS) by hand. This allows for a more efficient and intuitive workflow in many situations.

The Slide Module v3 can be operated by your choice of batteries or a power adapter, both options sold separately. For battery power, it requires optional Canon or Sony battery brackets and two LP-E6 or two L-series batteries. Or you can get the AC/DC Adapter for Slide Module. One of these options is required. With two LP-E6 batteries, the Slide Module v3 runs for approximately two hours and shoots about 12,000 photos in time-lapse mode.

Compatible devices include the HeadONE single, HeadONE dual, HeadPLUS, and HeadPLUS PRO. When the Slide Module v3 is synced with your SliderPLUS and HeadPLUS, you can perform automatic target tracking and live target switching. Add a Laser Module to the HeadPLUS, and you can teach the position of any stationary target to the system instantly by just aiming at the target and pressing OK. The camera will instantly frame and focus on the target. Used with the SliderPLUS and HeadPLUS or HeadONE, the Slide Module v3 also lets you achieve sequencing by setting up multiple poses to create comprehensive camera motion with adjustable speed and looping.