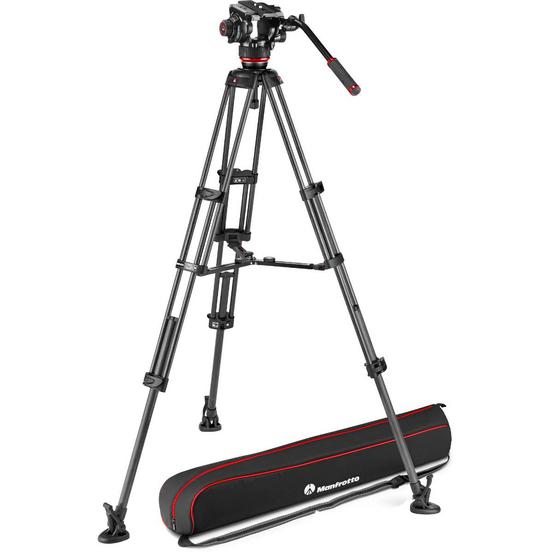 Support your camera rig with the Manfrotto 504X Flat-Base Fluid Video Head and Carbon Fiber Tripod with Mid-Level Spreader. The system features the 504X fluid tripod head, the MVTTWINMC carbon fibre tripod, a levelling ball to adapt the head to the tripod, and a carry bag.

The head features a 12 Kg maximum load, a pan bar, a quick-release plate, a counterbalance system with four presets, and its open bridge design that provides stable, smooth performance and reduces weight. Its flat base with a 3/8"-16 female mounting thread allows compatibility with a wide range of tripods, monopods, sliders, jibs, and dollies, and a variety of rigs.

The twin-leg carbon fibre tripod provides a 20 Kg maximum load and a 75/100mm ball head mount, and it features a mid-level spreader. The 504X head mounts onto the MVTTWINMC tripod using the included levelling ball. A carry bag is included to store and transport the entire system.

The Manfrotto 504X Fluid Video Head with Flat Base features an open bridge design that provides a stable, smooth performance while reducing weight. The head's patented bridge technology allows for a wider top surface and longer sliding plate that add stability and balance. The head features a flat base with a 3/8"-16 female mounting thread that allows compatibility with a wide range of tripods, monopods, sliders, jibs, and dollies, and a variety of rigs.

With its ability to support up to 12 Kg, the 504X can be used with a variety of video and photo cameras and rigs. The pan and tilt counterbalance system includes four presets from 0 to 2.1 to 4.39 to 6.48 Kg, enabling proper balance no matter what the camera's size or weight.

At the same time, variable friction components with clearly marked degree scales and vibration-free movement bring new levels of fine-tuning to your tilts and pans. A levelling bubble keeps horizons from tilting, even in the dark, while independent disc-brake locks make sure the head stays secure when at rest.

Whether you're using a pro camcorder or an accessorized DSLR, the 504X provides a 504PLONGR-1 sliding quick release plate with 1/4"-20 and 3/8"-16 threads to balance the camera properly on your rig. The head is made from durable aluminium and includes a pan bar that can be attached via rosettes on either the right or left side to help create smooth pan-and-tilt movements.

The Manfrotto Carbon Fiber Twin Leg Video Tripod Legs with Mid-Level Spreader is suitable for use on flat, smooth surfaces as well as uneven terrain, and it features carbon fibre tubes that are both strong and lightweight while being corrosion resistant. The legs incorporate a 100mm half bowl and include a 75mm adapter ring, so you can use them with heads that have either a 100 or 75mm half ball. The legs support up to 20 Kg, which allows you to mount an appropriately sized fluid head, camera, and accessories without straining the capacity of the legs.

With the included mid-level spreader attached the height of the legs can be adjusted from just under 2 to over 1.5 m high, and the legs collapse to under 71 cm in length for transport and storage. Removing the included rubber feet reveals the dual spiked feet, which are useful for soft surfaces such as gravel, dirt, or sand. The legs weigh a mere 3 Kg, making them easy to take almost anywhere you can go.